The mobile control post 9S482M7 PU-12M7 is the battery command post (BCP) mounted on the chassis of K1h1 (based on the BTR-80 chassis), that provides the control for combat actions of anti-aircraft missile complexes of short-range combat vehicles type of Strela-10M2, Strela-10M3, ZSU-23-4 Shilka, OSA-AK, OSA-AKM, TOR-M1, Tunguska-M1, and MAMC Igla.

Operating range of position data reading: up to 100 km
General quantity of received targets: up to 99
Quantity of simultaneously connected sources of radar information: 3
Quantity of channels of data reception/transmission: 5

The PU-12M7 battery command post manufactured by the plant is used to control combat vehicles of the following ADM systems:

As distinct from its predecessor, the PU-12M7 battery command post ensures operation of a battery of combat vehicles of the Tor-M1 ADM system, the Tunguska-M1 antimissile system's combat vehicle, and simultaneous reception of telecoded information from the superior command post, or a radar that has a telecoded output, and semiautomatic processing of primary data received from the radars that have an analog output (P12, P15, P18, P19, P40 and their derivatives).

The total number of targets that can be handled at one time is up to 99.

The number of targets that can be tracked semiautomatically is 5 to 7.

The number of the radar data sources that furnish information simultaneously is 3, including:
= one analog output radar;
= one superior command post (or telecoded output radar);
= one radar of one of the

Tor-M1 ADM system combat vehicles or of the Tunguska-M1 system.

Reception, processing and evaluation of data furnished by three radars make it possible to enhance efficiency of ADM systems in service with a motorized infantry or tank regiment while halted or on the move.

Ease of operation and maintenance, wide choice of communication channels, use of various types of power supplies and low power requirement (2.1 kW) are the hallmarks of the PU-12M7 system.

The PORI-P1M and PORI-P2M radar data reception and processing stations represent the unified sources of radar data for use with the command post of the Polyana-D4ME ADM brigade.

The PORI-P1M station is designed to receive and process the data supplied by digital radars. It comprises two mobile units (MP200M and MP203M) mounted on the chassis of KamAZ trucks and a diesel-driven electric generating set ED2x30-T400.

Basic Characteristics
of the PORI-P1M Station
Number of:
targets handled
at a time up to 150
single and multiple targets
tracked simultaneously up to 50
radar data sources up to 6
(including three PORI-P1M)
Target lock-on and tracking operations are performed automatically.

The PORI-P2M station is designed to receive and process the data supplied by analog radars, radio altimeters and digital output radars. It comprises two mobile units (MP201M and MP202M) mounted on the chassis of the KamAZ trucks and a diesel-driven electric generating set ED2x30-T400.

Use of the PORI-P1M and PORI-P2M radar data reception and processing stations enhances the war fighting efficiency of an ADM brigade. 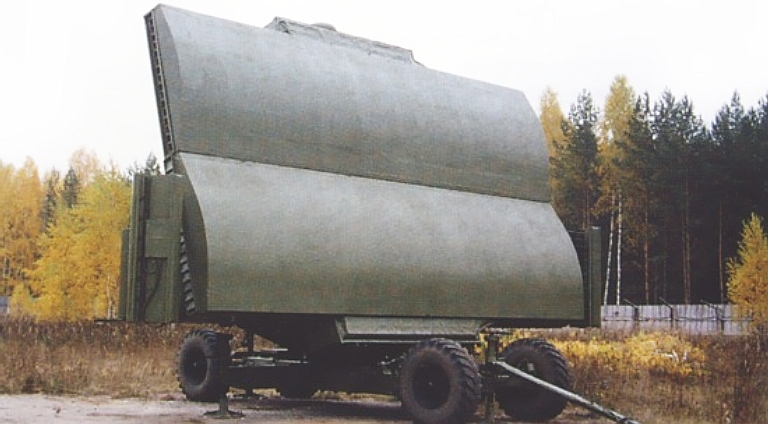 VNIIRT Gamma DE AESA deployed configuration (above) and stowed configuration (below). Three subtypes exist, the D1/D1E, D2/D2E, and D3/D3E with differing module power ratings and range performance. Depicted is the towed configuration with a 20 minute deploy/stow time. VNIIRT disclosed in 2007 that a self-propelled variant was available, with a 5 minute deploy/stow time compatible with the S-300PMU2 and S-400 SAM systems. To date no imagery of the self-propelled variant has been disclosed. 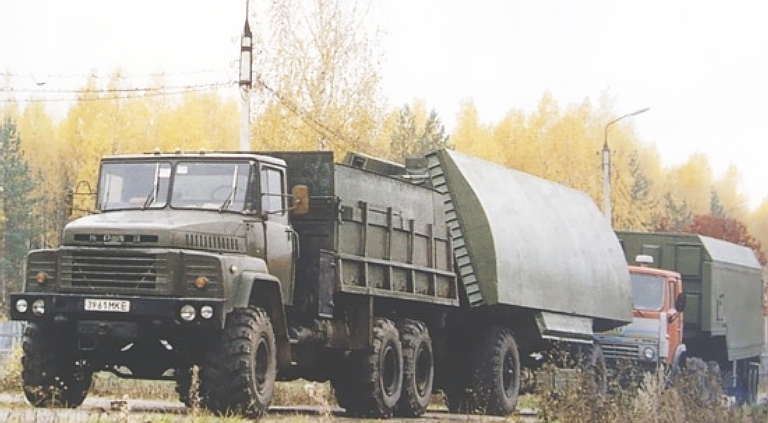 The VNIIRT designers paid considerable attention to operation in high threat environments. A number of design features were introduced for this reason:

The ability to concentrate emitted power into search sectors which are being subjected to jamming, to decrease the J/S ratio.
Wideband pulse-to-pulse automatic frequency hopping with automated avoidance of jammed frequencies (i.e pre-transmit sniffing), employing a spectrum analyser.
Signal processing functions to reject incoherent signals received in the mainlobe, such as jammers or other interfering in-band emitters.
Multichannel rejection of jamming. This is likely to have been implemented by forming nulls in the mainlobe.
Jammer rejection by sidelobe blanking.
Adaptive multichannel pulse Doppler filtering for clutter rejection. While VNIIRT literature describes this as DMTI, it is not clear whether the technique used is conventional DMTI or pulse Doppler.
Rejection of jammers and signals with low radial Doppler shifts relative to the radar.

Another very modern feature in this design is the use of Non-Cooperative Target Recognition (NCTR). This is claimed to be performed by the analysis of backscatter power levels, correlation against known signatures, and the flight trajectory characteristics of the track. Helicopters are recognised by analysing the advancing and receding rotor blade Doppler shifts.

Like many Western L-band radars, such as the MESA, the Gamma-DE has an integrated IFF function in the primary array, supporting Mark XA and XII modes. This is performed using the VNIIRT developed Voprosnik-E secondary radar, embedded in the Gamma-DE antenna system.

A single Gamma DE system comprises a towed antenna head trailer with the 1280 element 8 x 5.2 metre AESA on a turntable, a semi-trailer radar cabin with electronics and operator stations, and a dual redundant 16 kiloWatt diesel generator. An option cited for the Gamma DE is deployment of the radar head on the 24 metre 40V6M or 40 metre 40V6MD semi-mobile mast systems. The latter are carried by semi-trailer and typically towed by a MAZ-537 or other tractor. Cited time to deploy the basic demonstrator configuration is 1.5 hrs. More recent (2007) VNIIRT data states 20 minutes to deploy the towed configuration, and 5 minutes to deploy a self-propelled configuration carried on a truck. This qualifies the towed Gamma DE as mobile, and the self-propelled configuration as "shoot and scoot".

To date no details of the self propelled variant have been disclosed. Given the size and weight of the Gamma DE antenna system, the configuration is likely to be similar to that of the 91N6E Big Bird rather than 96L6 , most likely using the MZKT-7930 tow tractor, and a gas turbine generator equipped semi-trailer for the antenna head and equipment cabin.

In the towed variant, radiofrequency datalinks permit the cabin to be located up to 1 km from the AESA, and additional datalinks permit up to 15 km separation between the cabin and an IADS command post. For semi-hardened revetted deployment optical fibre cables are available.

Almaz-Antey literature on the S-400 / SA-21 system states that compatible interfaces are available between the S-400 battery and the Gamma DE system. The azimuthal tracking accuracy of 0.17-0.2°, elevation accuracy of 0.2-0.3° and range accuracy of 60-100 metres make this radar eminently capable of providing midcourse guidance updates for a range of SAM systems. For comparison, the 64N6E Big Bird series used in the SA-20/21 has around twice the angular and range tracking error magnitude compared to the Gamma DE. 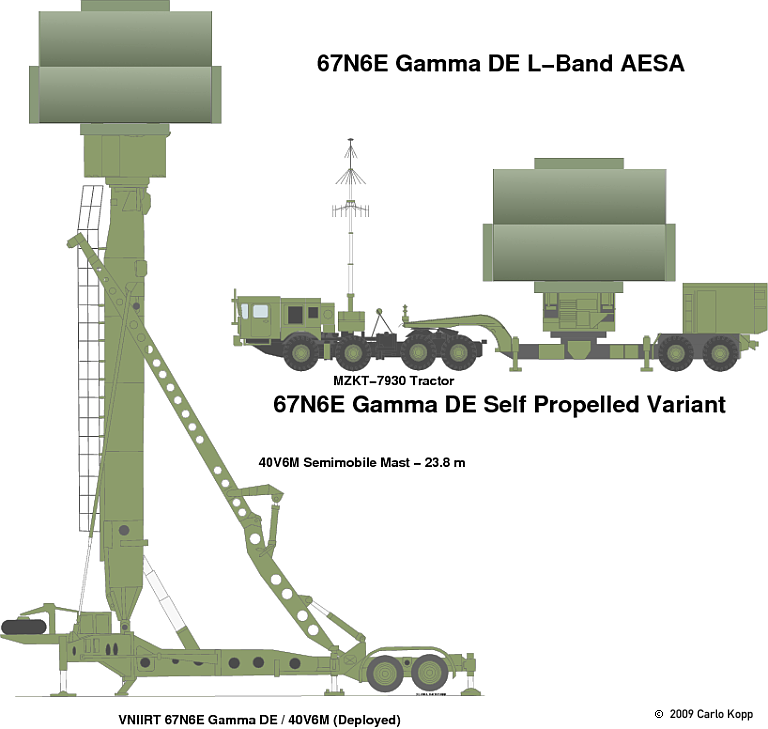 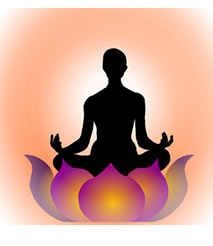 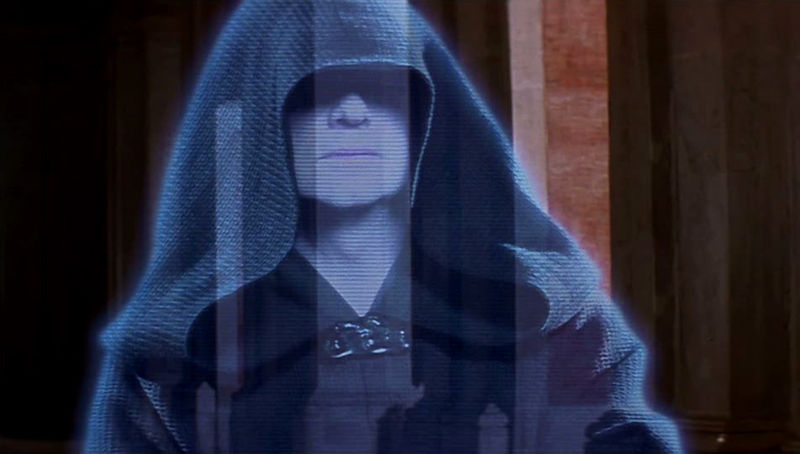