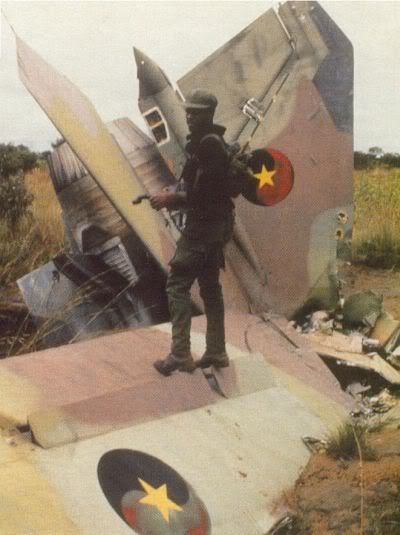 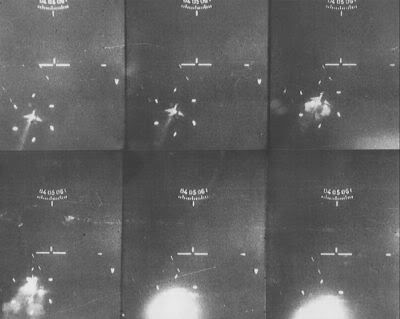 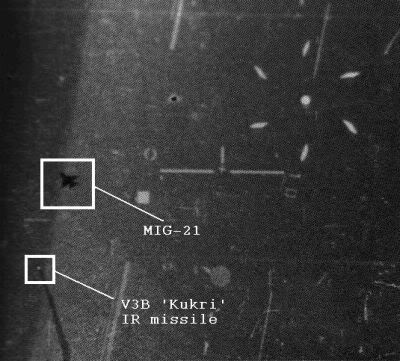 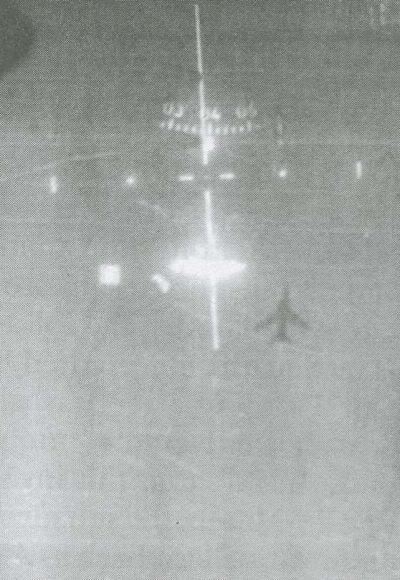 This is my recollection of events leading up to the accident.

It was approximately 1500B (local) on 27 September 1987 when all hell broke loose. There had been numerous call-outs previously which proved to be nothing at all, so when the hot line started ringing there was very little reaction. However this time the call wasn't to go on cockpit standby like before, but rather to scramble immediately.

The letter home I was writing went flying as I scrambled to get into the cockpit. In a matter of minutes we were screaming down the runway. I was lucky I was number two in the formation as it was about 45 deg C outside and the take-off was hair raising. How numbers three, four, five and six got airborne I don't know.

After take-off we remained low level and set heading for the combat zone. It was our intentions to remain low level for as long as possible to avoid being detected by the Angolan radar's.

The order came to pitch about 10 minutes after take-off and up we soared like homesick angels. We leveled of at about 30 000' and the mission controller sounded like a horse racing commentator with all the instructions he was giving us to intercept the targets. Next came the order to jettison the drop tanks. This command is a little strange for me, because one never throws the tanks away in training so only when I saw a 1 200 liter tank falling away from the lead aircraft did I know this was no training sortie. It was serious. The adrenaline was flowing.

The next thing I saw was a Mig 23 flying through the formation about 300' below us. My first reaction was WOW what a great looking aircraft. This was the first time I had seen one in the flesh so to speak. When he started turning only then did I see the second Mig. I called the engagement and started turning. I was doing Mach 1.3 (about 1600 km per hour) and he was going like hell so the turn was so wide I almost lost sight of him.

This where I get a little frustrated. For 10 years I have trained for this day and the majority of the fight I cannot recall. WHY! Anyway the next thing I remember is this Mig coming head on at me from about my one, two o'clock position. Still turning towards him I remember flicking the trigger safety over to the cannon position. If he was going to fly through my sights I was going to squeeze off a few rounds. Unfortunately for me he got off the first shot.

There was a bright orange flash from his left wing and then this incredibly fast telephone pole came hurtling towards me trailing a solid white smoke trail. What more is that it was cork screwing so I was never sure where it was going.

In all our training we were taught to break towards the missile. This could or should create a tracking problem for the missile and cause it to possibly overshoot.

But faced with reality I found it took a lot of willpower to fly towards something I knew was trying to kill me. However, I kept breaking towards it and I watched it corkscrew over my right wing and disappear behind me. I thought it had missed until I I heard a dull thud and felt a light bump on the aircraft. I immediately scanned all the gauges but there was not indication of any damage. When I looked up again the Mig flew over the canopy and disappeared behind me as well.

I immediate informed the leader that I thought I might have been hit and his reaction was: "OK let’s go home." I did not need a second invitation and I rolled the aircraft onto its back and headed for the ground.

With hindsight it appeared that the whole fight whole fight lasted no more than 60 seconds from the time we pitched until I got the ‘go home’ command.

This is perhaps where I got a fright for the first time. I had not retarded the throttle any and I was rushing at the ground in a vertical dive. When I pulled the stick into my stomach to recover from the dive all that initially happen was the aircraft changed attitude but not direction. The momentum was so great the aircraft carried on descending. Just when I thought that is the end of me, the aircraft bottomed out just above the trees.

With all this rolling and diving I was separated from my leader and had no idea where he could be. Just then I started getting a radar warning audio in my helmet from my 6 o’clock (from behind). Some radar was looking at me. Was it the anti aircraft batteries or was it the Mig? I radioed to the boss that I thought someone was behind me. His reaction was to tell me get as low as I can, as fast as I can and not to turn to look behind me.

My first reaction was - I was so low I was raising a dust cloud like those crazy American Road Runner cartoons. The leader said he could set any dust trails so I eased the aircraft lower. The radio alt read 50' and the speed approximate 730-740 knots.

At this stage I was beginning to think that I’d over-reacted and that I might not have been hit. Had I got out of the fight too early? The aircraft was performing as if there was nothing wrong with it. No vibrations and no handling difficulties. Oh well tomorrow I'll be back I thought.

It was now about five minutes later and half-way home when the first warning light flashed on. EP pump failure. Instinct must have taken over because I thought my first reaction was to call the boss and tell him I have a failure. He pulled out his emergency check list, and started reading the failure procedures for me. All the necessary switches had be set. I don't remember doing them.

This caused a little concern initially as the aircraft's main systems use hydraulic fluid. Undercarriage, flaps, controls, airbrakes and of course wheel brakes. After a quick and careful analysis of the situation I relaxed a little. The HYD 2 system is basically a standby system for the main HYD 1 system. All I had really lost with the HYD 2 failure was the nose-wheel steering. It could have been worse.

By now we were far enough away from the combat zone and the dangers associated with it, so I started to climb to try and conserve fuel.

The next thing that happened is that I was getting an audio warning but no visual warning when I looked at the panel. The hours of simulator training came into action - a pending OIL failure. This concerned me a little more than the rest of them. There are two critical components that use oil. The throttle and the nozzle flaps on the engine.

Flying the aircraft on the emergency throttle (electrically operated) is not easy. The throttle is very slow and unresponsive.

At this time the leader pulled in next to me to inspect for any damage. He reported fuel leaking out the aircraft and the drag chute was missing. As he said that the 500 liter warning light came on. The fuel gauges still read 1700 liters so now which one is right. A little more pressure was applied to little old me.

Landing a perfectly serviceable aircraft on a 7500' runway requires some work. I was going to have to do it on emergency throttle and without a drag chute - a task I felt I could handle.

I planned to land the aircraft short on a new stretch of runway that was being constructed. This would give me an additional 500' to play with on the landing roll. I got her down at the threshold but when I applied the brakes the only thing that happened was the expression on my face changed. I pulled the nose higher so that there would be some form of aerodynamic braking but this did not help. About a 1500' from the end of the runway I applied the emergency hand brake with little effect. The arrester bed or sand pit at the end of the runway was my next hope of stopping this machine.

The aircraft went through the arrester bed like a hot knife through butter. No braking effect whatsoever. The next 'obstacle' was the security fence.

Where does ones sense of humor come from in at a time like this? I was about to go AWOL (absent without leave) with a multimillion rand aircraft. The board of enquiry are probably going to ask me who authorized this illegal departure from the security area. At the same time I was scared I was going to drown in the river just beyond the fence. My seat has a land survival pack in it and not an inflatable dingy!!

When I went through the fence I remember putting my hands in front of my face. It was at this precise moment that there was a loud bang. I remember smelling cordite or gunpowder and then everything went black. I felt the rush of wind over my face and the feeling of silk on my cheek. With hindsight I realized that when the ejection seat went off, my helmet must have come off as well and the silk I felt on the cheek was the ejection seat's stabilizing parachute and not my personal parachute.

When I regained my senses I was lying in the sand on my right hand side. The first thing I attempted to do was to roll onto my back and when I pushed on the sand with my left arm there was this incredible piercing pain in my arm. The left arm was broken just above the elbow. I then looked down at my legs to see why they had not moved and I could not feel them at all. I realized that the ejection seat was still strapped to my back and thought that this might have something to do with the lack of movement in my legs. I had no idea that the neck was dislocated.

I then started looking around and the first thing I saw was that I was lying directly in front of my aircraft. Here was a F1 Mirage pointing straight at me. The problem wasn't that the aircraft was pointing at me but rather that there was a fire just behind the left air intake. I know there is a fuel tank there but even worse was the fact that the ammo bins (with over a hundred rounds of 30mm ammunition) was just under the fire. If those rounds started going off I was in the line of fire.

When the fire brigade arrived on the scene they naturally came to my aid first. My immediate advice to them was that no one touches me until a doctor pitches up and that they immediately tend to the fire on the aircraft. There is no way that I want to be shot at by my own aircraft.

When the doctors arrived with the ambulance my first concern was they treat my arm for pain, then they can worry about the rest. Even after 2 morphine injections there was still not relief from the pain. I was later told that the adrenaline in the body was so high that the morphine had no effect.

Just before they pushed me into the back of the ambulance I passed out only to wake up in 1 Military Hospital in Pretoria 10 days later.

It was another seven months before I left the hospital with a C6, C7 fracture of the neck and permanently confined to using a wheelchair.