aqui esta la cronologia de la guerra donde en ningun momento dice que peru tomo las posiciones ecuatorianas Chronology of the War
The following days, the events unfolded in quick succession. Below is a complete chronological summary of the war.
January 24: Peru mobilizes troops towards Tiwinza, Ecuador engages in preparing the FAE (Ecuadorian Air Force), Ecuadorian fighter jets.
January 25: Peru militarizes a site in the Condor strip later known as Base Sur, thus provoking reaction by Ecuadorian forces, initiating the war.
January 26: Peruvian conscripts setting up a heliport behind the Ecuadorian outposts are attacked by Ecuadorian Special Forces, dislodging the Peruvians from the site; the Ecuadorians name the place Base Norte. Thus begins the shooting war.[8][9]
January 27: Ecuador and Peru order general mobilization. Armored units are deployed to the Pacific coast border area, ready to act in case of a general war. Altogether, around 140,000 men were mobilized during the war.
January 28: At 7:45, the Peruvians launch the first ground assault against the Ecuadorian positions in the Cenepa headwaters. The attack is renewed at 1105, this time with helicopters providing suppressive fire. The Ecuadorians claim hitting a helicopter. At 1205, Peruvian Air Force (FAP) ground attack aircraft make their first appearance over the valley, but withdraw upon being informed of the presence of FAE interceptors in the area.
January 29: In a pattern that will continue during the next days, Peruvian forces launch multiple and simultaneous attacks all over the area, in an effort to off-balance the Ecuadorian defenses. The Ecuadorians fight back at Tiwinza, Cueva de los Tayos, Base Sur, and Coangos, and shoot down a Soviet-made Mi-8TV helicopter belonging to the Peruvian Army Aviation (AEP). EP-587 becomes the first confirmed kill for the Ecuadorian MANPAD teams on the ground.[10] A second helicopter is reported as being hit. At the end of the day, Peru announces having captured three Ecuadorian strongholds as a result of the day's actions, which Ecuador goes on to deny.
January 31: After a 24-hours lull in the fight, the Peruvians resume their attacks against Tiwinza, Coangos, and Cueva de los Tayos. Ecuador and Peru reject an international appeal for an immediate ceasefire.
February 1: The assaults continue, now with strong artillery support. Peruvian A-37B ground attack aircraft appear over the battlefield and bomb Ecuadorian positions. The Ecuadorian base of Cóndor Mirador, in the summit of the Cordillera del Cóndor falls also under attack. A Peruvian patrol approaching Cueva de los Tayos hits a minefield and suffers severe losses.
February 2: During the day, the FAP carries out no less than twelve ground attack sorties, in support of the ground troops assaulting Cueva de los Tayos and Base Sur. FAE interceptors, still flying from bases too far north, near Guayaquil, appear too late to find any targets.
February 3: Ecuadorian Strikemasters and A-37B ground attack aircraft appear for the first time to bomb Peruvian positions.
February 4: Peruvian Embraer EMB 312 Tucano bomb Ecuadorian positions in the valley during a night bombing sortie.[11]
February 6: The FAP begins to make use of its Canberra jet bombers to strike Ecuadorian positions. One Canberra is lost. Although the Ecuadorians claim having hit one Canberra with AA fire, the Peruvians claim it crashed into a mountain due to the bad weather conditions over the area.
February 7: In a bitter reminder of the dangers that the Cenepa valley pose for low-speed aircraft flying at low-altitudes, a FAP Mi-25 helicopter gunship is downed after being hit in quick succession by at least two — probably three — Strela shoulder-fired missiles. FAE A-37Bs, escorted by Kfir fighters, continue to attack Peruvian positions. One A-37B is hit by Peruvian AA fire, but manages to get back to base.
February 9: Heavy air activity. The FAP carries out no less than 16 ground attack sorties, throwing its fleet of Sukhoi Su-22 fighter-bombers into the battle. FAP Canberras carry out a night bombing mission.


An Ecuadorian Air Force Mirage F.1JA FAE-806 that shot down a Peruvian Air Force Sukhoi Su-22 on February 10, 1995.
February 10: Heavy air activity continues over the battlezone. During the morning, the FAP sends in A-37Bs and Su-22Ms to strike Ecuadorian positions. The FAE steps in. At 12:42, the Ecuadorian radars pick up five enemy targets approaching for another round of attacks. Two FAE Mirage F.1JAs and two IAI Kfir C.2s are sent to intercept the incoming aircraft. In the ensuing action an A-37B subsonic aircraft is shot down by a Kfir and two Peruvian Su-22 were shot down by 2 Ecuadorian Mirage F1 respectively.[12]
February 11: Further Peruvian Special Forces reinforcements arrive at PV-1. As the ground war drags on, air activity over the area increases. Encouraged by the events of the day before, the Ecuadorian A-37Bs launch even bolder ground-attack missions on Peruvian positions. One FAE A-37B is hit by a Peruvian MANPAD, but the crew manages to fly it back to base.
February 12: Air operations continue. The Peruvians claim the destruction of one A-37B and one Kfir, both of them denied by Ecuador.
February 13: Peruvian forces launch powerful attacks against Coangos and Tiwinza, with heavy air support. One Peruvian Mi-8TV is lost to Ecuadorian fire. The Ecuadorians shot down another helicopter, probably a Mi-17, also denied by Peru. In the evening, Peruvian President Alberto Fujimori appears before the cameras to claim the taking of Tiwinza and total victory for Peru. (This information was later recalled by the guarantors as false media.)
February 14–16: Combat continues all along the area.
February 17: In the presence of the four guarantor countries of the Rio Protocol (the USA, Brazil, Chile, Argentina), Ecuadorian Vice-Minister of Foreign Affaris, Marcelo Fernández de Córdoba, and Peruvian Vice-Minister of Foreign Affairs, Eduardo Ponce, sign a peace declaration in Brazil (Declaración de Paz de Itamaraty), confirming a ceasefire, a separation of forces, a general demobilization, and establishing a "guarantors" peacekeeping force, the MOMEP (Military Observer Mission, Ecuador Peru), charged with supervising the separation of forces, taking over the posts of Tiwinza and Base Sur, and suggesting the limits for an eventual demilitared zone. Ecuador and Peru pledge themselves to begin talks on the "pending issues".
February 21: The first MOMEP observers arrive to the Ecuadorian rear base of Patuca, but confused fighting rages on all-day long, preventing the observers to reach the area of the conflict. Ecuador claims Peruvian helicopters are violating the cease-fire by flying over the Ecuadorian posts.
February 22: In a day that Ecuadorians refer to as "Black Wednesday", Peruvian forces launch a strong attack on Ecuadorian positions near Tiwinza. According to Ecuadorian sources, fourteen of their soldiers died that day, the worst in terms of casualties for the Ecuadorian Army during the war.
February 28: After more days of confusing skirmishes, Ecuador and Peru sign the Montevideo Declaration, "reiterating their commitment to proceed to an immediate and effective ceasefire.". Although minor incidents would continue all over the area during the next months, the Cenepa War is officially over.

By the beginning of March 1995, the MOMEP observers had entered the area and began to supervise the separation of forces. In accordance with the Treaty of Itamaraty and the Declaration of Montevideo, the Ecuadorians began to withdraw all their units to the base of Coangos, while the Peruvians were to do the same to PV-1. From there, troops would be extracted according to a schedule implement by the MOMEP. All combatants were withdrawn from the disputed area by May 5, 1995. A demilitarized zone came into effect on August 4 of the same year. Ecuador and Peru went on to negotiate the final demarcation of the border, in a lengthy process marked by one crisis after another, with a total war almost erupting in August 1998. Finally, on October 26, 1998, in Brasília, Jamil Mahuad, President of Ecuador, and Alberto Fujimori, President of Peru, along with the Presidents of Brazil, Argentina, and Chile; and a personal representative of the President of the United States of America, signed a Presidential Act, which proclaimed "the definitive resolution of the border disputes between the two nations".[14]
In a decision that certain political sectors on both sides took as a setback, the Guarantors of the Rio Protocol ruled that the border of the undelimited zone was indeed the line of the Cordillera del Cóndor, as Peru had been claiming since the 1940s. While Ecuador had to give up its decades-old territorial claims to the eastern slopes of the Cordillera, as well as to the entire western area of Cenepa headwaters, Peru was compelled to give to Ecuador, in perpetual lease but without sovereignty, one square kilometer of its territory, in the area where the Ecuadorian base of Tiwinza — focal point of the war — had been located within Peruvian soil and 2 ports . The final border demarcation came into effect on May 13, 1999. 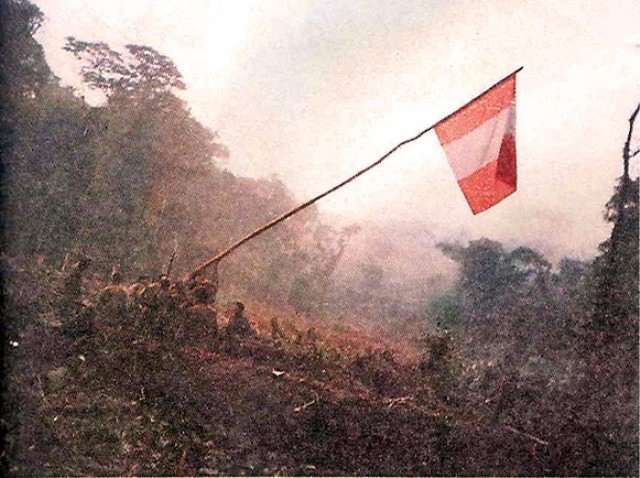 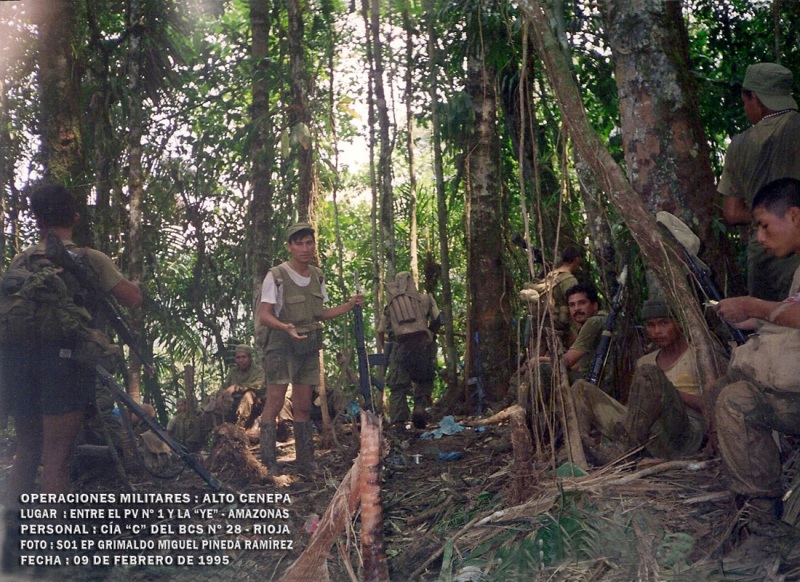