Indian Army Gets its First Armoured Regiment of MBT Arjun 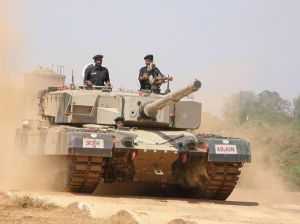 Indian Army Gets its First Armoured Regiment of MBT Arjun

History of sorts was made today as the Indian Army proudly equipped itself with the first Armoured Regiment of indigenously built Main Battle Tank, Arjun. The development marks the fruition of 35 years of research in self-reliance by dedicated Indian scientists against all odds.

MBT Arjun is the state-of-art main battle tank designed and developed by Combat Vehicles Research and Development Establishment (CVRDE), Avadi along with other DRDO and industrial partners.

MBT Arjun is provided with excellent mobility, superior fire power and protection and the features are quite comparable to contemporary world tanks. The Kanchan armour, hydro-pneumatic suspension, armament system, Integrated Fire Detection & Suppression System, system engineering and system integration of complex weapon platforms are some of the significant indigenous technologies of Arjun, developed by DRDO labs.

As there was a long gap from the R&D phase to production phase from 1993 to 2000, problems related to re-establishing production lines and vendor sources and resolving overseas issues like technology denial in view of Pokhran testing, change over and mergers of OEMS for the critical items, delayed initial commencement of production.

In order to meet the production requirement, additional infrastructure facilities and machine tools were established at HVF, Avadi and Ordnance Factory, Medak. However, the first pilot batch of production tanks was handed over to Army on 7th August 2004 in the presence of the then Defence Minister Shri. Pranab Mukherjee.

During subsequent production, Army insisted upon the demonstration of medium fording capabilities of MBT Arjun. Both CVRDE and HVF continuously worked on war footing, to meet the stringent requirement of medium fording to a height of 2.1m in water with preparation time of 30 minutes as retro-fitment solution and demonstrated successfully to Defence Minister Shri A. K. Antony and other dignitaries on 2nd July 2007.

Subsequently, the production tanks were incorporated with all medium fording modifications and the next batch of nine tanks were handed over by Sep 2007.

Each phase consists of 1000kms run and 100EFC (Approx. 160 rounds of APFSDS and HESH – primary and secondary rounds) over a temperature range of -5° to 50° C. One of the main issues during AUCRT trials was the failure of the bearings of transmission of M/s RENK, Germany, due to rise in lube oil temperature. However, this was immediately solved by modifying the software during AUCRT itself and the efficacy of the software was proved for more than 4000kms.

The outcome of AUCRT trials raised the confidence levels of the users over the reliability and endurance of MBT Arjun and they confirmed that the overall performance of the MBT Arjun during the stringent AUCRT trials was satisfactory and cleared the production tanks with minor modifications suggested during AUCRT, for induction. Both CVRDE and HVF along with DGQA agencies worked out methodologies to introduce all AUCRT modifications within shortest time frame and the next batch of 17 tanks were handed over to Army by 3rd March 2009.

As suggested by Army after AUCRT trials, Arjun tanks were subjected to rigorous trials and assessment by a third party audit (an internationally reputed tank manufacturer). After the extensive evaluation, the reputed tank manufacturer confirmed that the MBT Arjun is an excellent tank with very good mobility and fire power characteristics suitable for Indian desert. They also added inputs such as quality auditing, production procedures and refined calibration procedures for further enhancing the performance of MBT Arjun.

DRDO will be incorporating all these inputs in the next regiment of 62 tanks for handing over to Army before March 2010 as desired by the Army.

The regiment of 45 tanks will be subjected to a conversion training and field practice for a period of 3 months. Thereafter, the Army is planning to conduct a comparative trial with T-90 tanks in Oct/Nov 2009 to assess the operational deployment role of the tanks.