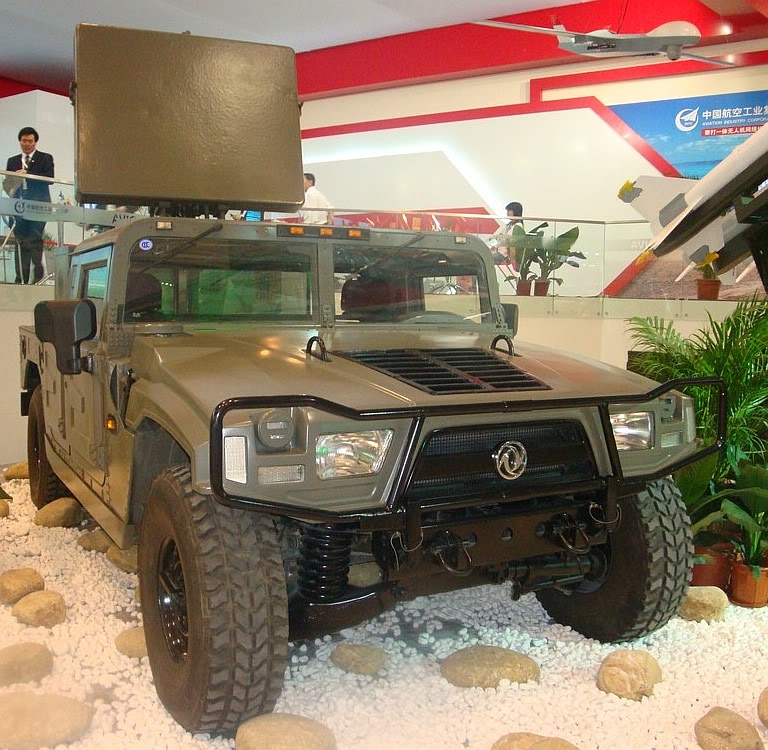 The 1999 air campaign over Kosovo presents lessons about the current state of the surface-to-air-missile (SAM) threat that may be seriously misunderstood. Since aircraft losses were so few, complacency about the SAM threat may be an unwarranted conclusion. The air campaign was waged against a relatively modest air-defense system with no new-generation radar-guided missiles. Yet the presence of small numbers of advanced infrared (IR)-guided SAMs forced NATO air planners to restrict fixed-wing air operations to altitudes over 10,000 ft., thus inhibiting attacks and contributing to collateral damage to civilian targets. One overlooked aspect of the air campaign was the high loss rate suffered by NATO unmanned aerial vehicles (UAVs) and its implications for “information warfare.”


Serbia's strategic air defense was based around the older S-125 Pechora (SA-3) system. Although old, upgrades and clever tactics enabled it to down a F-117 stealth aircraft. (photos by S. Zaloga)
The Serbian air defenses in the Kosovo air campaign represented a fairly typical pattern of Soviet air defenses from the 1960-70 period. They are representative of the effects of stagnation in modern SAM proliferation through much of the world that had been dependent on Soviet supplies. As a result, they have implications beyond the Kosovo campaign.

Serbia’s strategic air defense was handled by a dwindling number of vintage Almaz S-75 (SA-2) and a small number of partly modernized Almaz S-125 Pechora (SA-3). Prior to the Yugoslav civil war, the air-defense command had six batteries of S-75s, totaling about 40 single-rail launchers, of which only three batteries were still operational in 1999. There were also 14 batteries of S-125s with 60 4-rail launchers — of which about 50 launchers were still operational in 1999.

Air defense of the field army was handled by four regiments of 2K12 Kvadrat (SA-6) mobile radar-directed SAMs, with two of the regiments stationed with the Serbian forces in or near the Kosovo area. Yugoslavia originally had about 70 of these, but high attrition during the civil war left only about 25 in the field in 1999. Furthermore, these launcher vehicles really constituted only 6 autonomous batteries since a 1S91 (Straight Flush) radar vehicle is needed provide guidance for every four missile-launch vehicles. This cumbersome arrangement restricted the flexibility of the Kvadrat batteries.

Air defense at divisional level included Strela-1 (SA-9) and Strela-10 (SA-13) IR-guided, low altitude, vehicle-mounted SAMs. The more common of these was the older 9K31 Strela-1 (SA-9), with some 113 launcher vehicles delivered to Yugoslavia in the 1970s. The associated missile was manufactured in Yugoslavia under license before the war. The Strela-1 system consists of four missile launchers, mounted on a wheeled BRDM-2 light armored vehicle, and has an effective ceiling of 3,500 m. It employs an older uncooled lead-sulphide seeker with no IR counter-countermeasures capabilities. Yugoslavia received a total of only 17 of the more modern 9K35M Strela-10 (SA-13) in the 1980s. This is an evolutionary descendent of the Strela-1, but mounted on a tracked MT-LB chassis. The Strela-10 has IR counter-countermeasures with later versions of the missile having a two-channel seeker. Besides these standard systems, Serbian air-force units attempted to create improvised air-defense missiles for their bases using IR guided air-to-air missiles. The normal aircraft rail-launchers for R-60 (AA-8 Aphid) and R-73 (AA-11 Archer) were lashed on to ground mountings codenamed Pracka (Slingshot). Serbian sources later claimed that the R-73 launcher was successful, though there is little evidence to support this.

Small-unit air defense was handled by anti-aircraft guns and a significant number of old Strela-2M (SA-7) and new Igla (SA-16/-18) manportable SAMs. The Strela-2M was produced in Yugoslavia under the name Strela-2M2J Sava and was available in large numbers. Serbia managed to purchase about 75 of the new 9K310 Igla-1 (SA-16) manportable IR-guided SAM from Kazakhstan and other sources in the mid-1990s. In total, there were about 850 manportable IR-guided SAMs in the Serbian armed forces in 1999.

NATO took the threat posed by IR-guided SAMs the most seriously, as these had been the primary source of casualties in Operation Desert Storm. There was some confidence that the radar-directed missiles could be dealt with using traditional means of suppression of enemy air defenses (SEAD) and electronic countermeasures (ECM). Unlike radar-guided SAMs, IR-guided SAMs present a serious suppression problem since the launchers rely entirely on passive sensors and are generally smaller, more mobile and easier to conceal. The older-generation IR-guided SAMs, such as the Strela-2M (SA-7) and Strela-1 (SA-9), use seekers that are more susceptible to conventional ECM, such as flares and “hot brick” IRCM. The newer IR-guided systems, such as the manportable Igla (SA-16/-18) and vehicle-mounted Strela-10 (SA-13), have more robust counter-countermeasures. Rather than risk aircrews to these systems, NATO planners restricted most air operations above 10,000 ft., where these small SAMs have very low probabilities of kill due to kinetic and sensor limits. Furthermore, the presence of these SAMs raised concerns about operating attack helicopters such as the AH-64 Apache deep behind Serbian lines and was a significant factor in US reluctance to deploy the Apache in combat.

The altitude limits succeeded in minimizing casualties to IR-guided SAMs. A single aircraft was hit by a shoulder-fired SAM, but it failed to fuze and bounced off the aircraft. Several other aircraft were damaged, possibly by this type of weapon. The mere presence of these weapons, however, inhibited air operations to a significant extent. Due to weather conditions, it forced NATO to abandon air missions when cloud cover precluded operations below the altitude limit, and none of the air forces other than the US had munitions such as the Joint Direct Attack Muntition (JDAM) that could be used in all-weather conditions. Secondly, it contributed to collateral damage against civilian targets. Although NATO aircraft did have electro- optical sensors for surveying targets before the strike, when used from medium altitudes, the resolution of the image in the cockpit is often mediocre. Civilian tractors and buses can be mistaken for military vehicles.


Although there were few in service in Kosovo, the Strela-10 (SA-13) was one of the more effective Serbian air-defense systems, since its guidance system includes IR counter-countermeasures.
(photos by S. Zaloga)
The lesson from this campaign for armies likely to face NATO or US air power is that investment in relatively inexpensive, new-generation IR-guided SAMs is the most cost-effective solution for tactical air defense. Even if they cause few or no aircraft casualties, they so inhibit air operations at lower altitudes that they can at least partly contribute to the air defense of ground units and degrade the effectiveness of attacking air units. This lesson has not been lost on several countries, and there is some evidence that both Iraqi and North Korean observers were present in Serbia during the air campaign.

The lesson for NATO and US air planners is that the threat posed by IR-guided missiles needs to be addressed more seriously. The development and deployment of directed IR countermeasures (IRCM) has been slow in the US Air Force and Navy, and even slower in the European NATO air forces. While the advent of GPS-guided munitions, such as the JDAM and the Joint Stand-Off Weapon (JSOW), will provide the ability to launch strikes against targets in all weather from safe altitudes, it does not solve the problem of recognition of mobile targets from these altitudes. Until the resolution of typical imaging-IR targeting sensors improves considerably, there will be some need to approach the mobile targets closely enough to determine visually whether they are hostile or civilian.

One of the overlooked lessons of the Kosovo air campaign was the extremely high attrition rate of NATO reconnaissance UAVs. Some 25 to 27 were lost in operations, of which 16 were US air vehicles. Some of these were lost to accidents, but a significant number were downed by IR-guided SAMs, according to Serbian sources. Many fell victim to the Strela-1 (SA-9) and Strela-10 (SA-13) vehicle-mounted SAMs, which have a higher-altitude capability than the manportable systems. There has been much talk about the information revolution in modern warfare. Yet something has to go out and collect this information, and high-resolution optical images are available only from airborne platforms when weather conditions are cloudy. Thus, UAVs played a vital role in intelligence collection and targeting during the campaign. The loss of unmanned UAVs is certainly preferable to the loss of manned reconnaissance aircraft in politically charged operations such as Kosovo. However, it remains to be seen whether these high attrition levels would be sustainable in a larger war against a better-equipped enemy. Most of the tactical UAVs have too small a payload to carry any reasonable ECM or IRCM package, so other approaches such as signature reduction may be necessary.

The most important lesson from Kosovo should not be that the radar-directed SAM threat can comfortably be ignored. Even though radar-directed SAMs did not present much of a threat in Kosovo, the hiatus in the sale of modern radar-guided SAMs may be coming to an end. The embargo has been lifted against Libya, and Russia is discussing advanced-SAM sales with Syria and other countries. France and Russia are pushing to lift the embargo against Iraq, and when this happens, a major SAM sale is likely to be one of the first aspects of Iraqi military modernization. Proliferation of advanced radar-directed SAMs may be accelerated by licensed production of Russian systems such as the Tor or S-300PMU in China. The Kosovo air campaign would have been a far more painful experience for NATO had there been even a single battery of S-300PMU in operation. There have never been any air operations carried out against an opponent defended with a missile system using contemporary track-via-missile guidance.

Nor is the technology remaining static. Many missile firms are beginning to realize that few countries can afford to replace the large and expensive high-altitude SAMs like the Russian S-125 (SA-3) or the US MIM-23 HAWK. Instead, there is considerable work being done on multistage hyper-velocity missiles, which attempt to provide a range envelope similar to the HAWK, but with for a lower purchase price and operating costs more similar to older medium-altitude systems. These include western systems like the Bofors RBS.23 BAMSE and Russian systems like Pantsir and Sosna. The Kosovo air campaign continued to demonstrate the difficulty of dealing with small, mobile SAM systems. The new systems will be more difficult to target, since each launch vehicle contains its own engagement radar and, thus, can operate autonomously, unlike the cumbersome Kvadrat and Pechora systems used by the Serbs. A proliferation of new SAMs of this type will complicate the SAM threat in future conflicts. 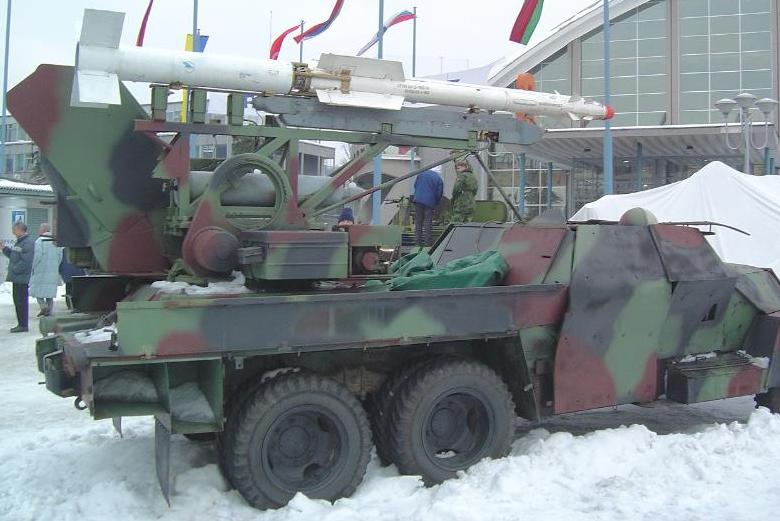 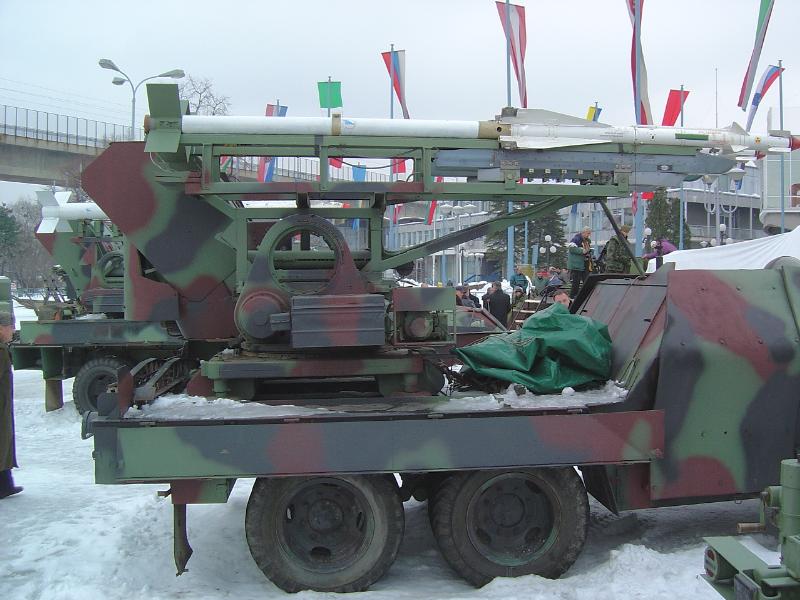 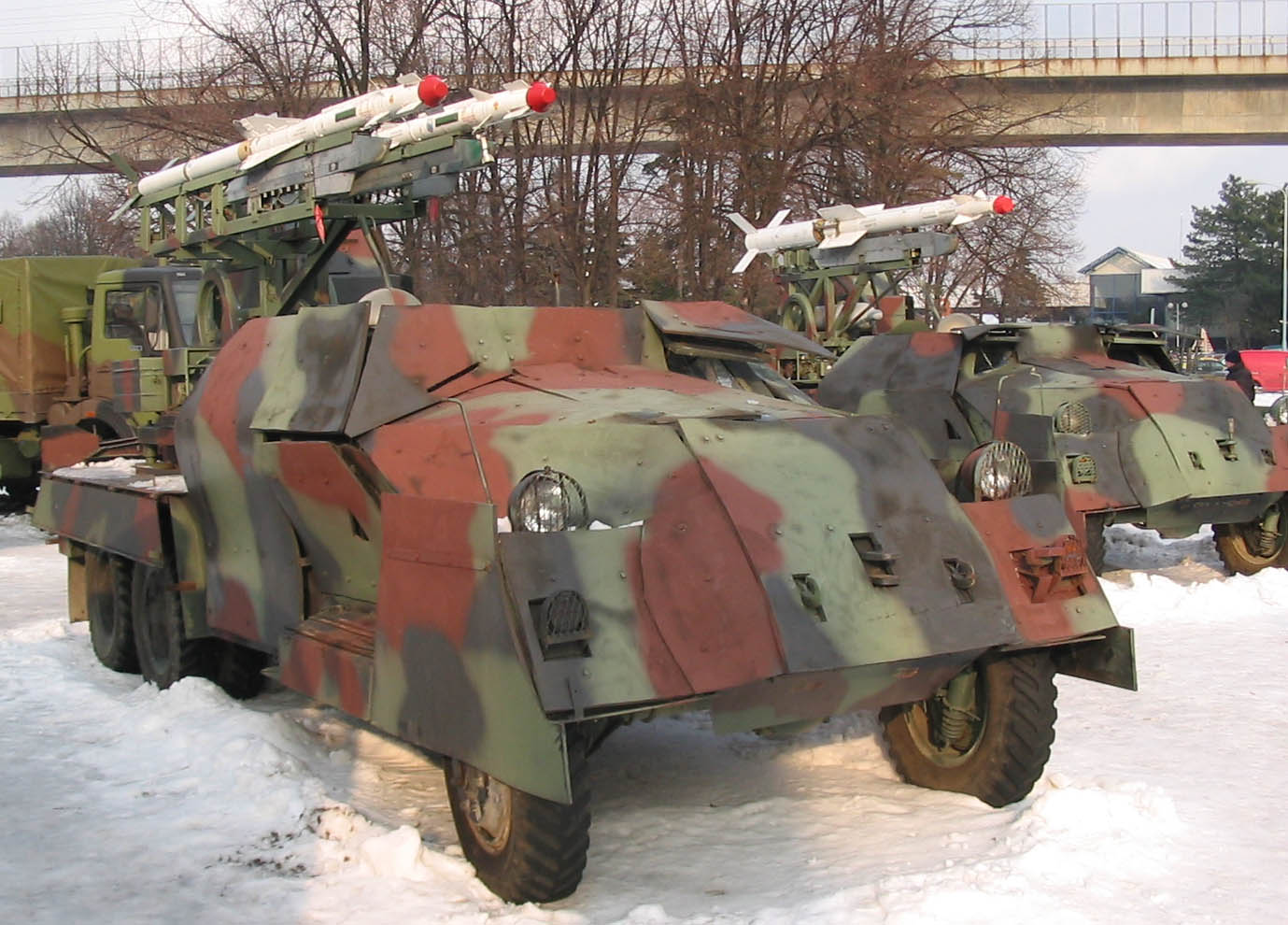 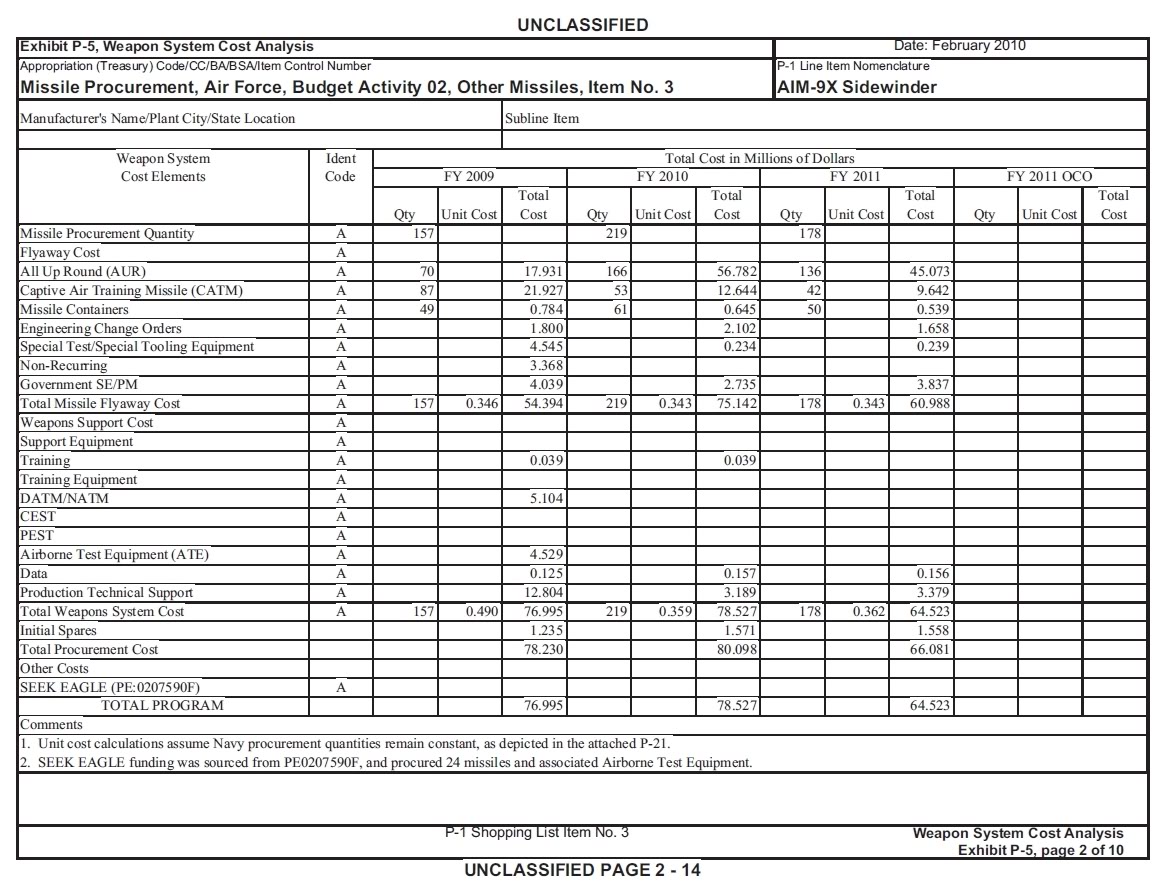 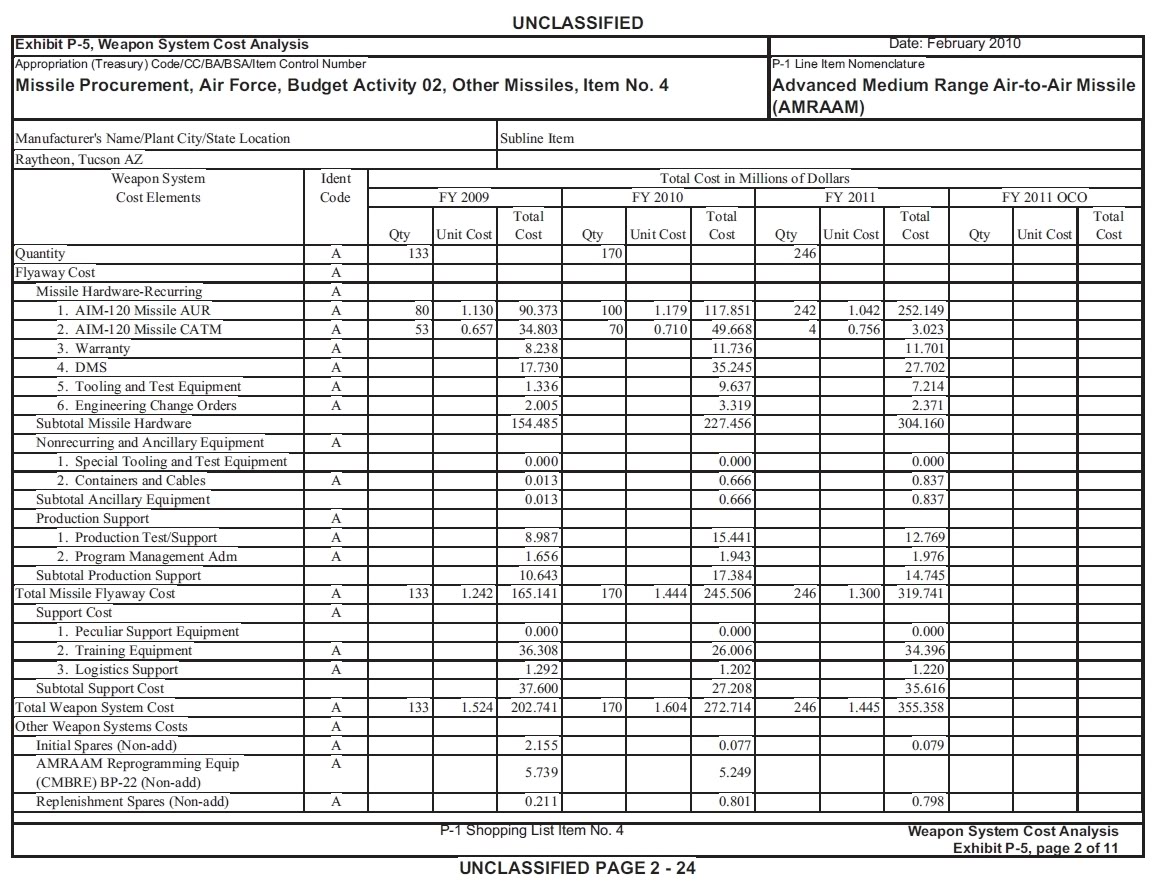